Ryan Woods is a proud Eagle Scout, America-first Republican, Christian, and political activist. He’s an award-winning journalist with a background in mass communication and video production. He’s President of Log Cabin Republicans Utah and is working to save his state from a leftist takeover.

He’s been performing and dancing since he was a tiny tot. Drag artistry is a composite outlet for all the things he loves, such as fashion, theater, costumes, makeup and imagination. “Being Lady Maga USA is about joy. When I see the smiles and happiness she brings to any event, my heart is full,” says Woods.

Most LGBT Conservatives are afraid to publicly share their views.

“I want to empower others to loudly and proudly declare their love of America and join the Conservative movement. I get so many messages from LGBT Conservatives who are afraid to speak out. I hope my example inspires them to have the courage to do so,” said Woods.

Ryan uses drag artistry to defy the radical LGBTQIA+ movement which pushes a dangerous agenda such as hormone injections for children, “drag kids,” sexually explicit “Pride Parades” and overt persecution of traditional families and religious Conservatives. His artistry is meant to be fun, uplifting, and inspiring—not vulgar or degrading, as is the case with most mainstream “Drag Queens.” 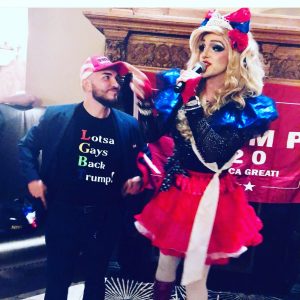 “Ryan, aka Lady Maga USA, is one of the kindest and most loving human beings I know. He has built a fan base on love and celebrating American values for all people. We both believe in patriotism, music and dressing up to cheer others up! He has been a light in a dark world,” —Joy Villa, top Billboard recording artist

Lady Maga USA is a fierce representative of LGBT Conservatives across America.

It’s about defending the fundamental American freedoms that are under attack.